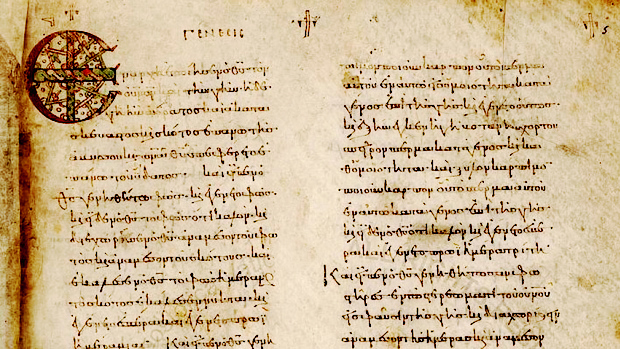 To answer this question, Pelikan brought the readers back to the ancient time, to understand where does it all began, how it evolved and ended up as what we have today.

He started by introducing readers to the God who speaks. This is a crucial fact that the scriptures were based on spoken words, long before it was written down. This was a natural way even for us as human, as a child, we learn how to speak first, before we learn how to write. Pelikan cited the famous thinker Socrates, he was well known but never written any book. All of Socrates wisdom were spoken words, which later recalled and written by his disciples. This, Pelikan argues, is also true about Jesus. He speaks but never writes anything. His deeds were written “at least three or four decades” later.

The words were spoken by the prophets. The Jewish Tanakh carried a heading Nevi’im which means “the Prophets”. To explain this concept, Pelikan cannot solely depend on Judaeo-Christians tradition, he went to explain that in the tradition of the Quran, Allah declares that the message was brought through a man, Muhammad, which Muslims refer to simply as ‘the prophet’.

Pelikan reiterates the primacy of spoken words; “Modulating the tone of voice, speaking loudly or whispering, pausing, speeding up or slowing down, gestures, grimaces, and smiles – all of these are dimensions of oral communication and tool of persuasion” that no writing system can hope to reproduce.

Pelikan then drew attention to the question of language on his second chapter “The truth in Hebrew” from Latin translation of “Hebraica veritas”. “The Jewish Tanakh makes up at least three-fourths of the Christian Bible,” wrote Pelikan. Part of Jewish Tanakh, in Nevi’im, contained biographies which are not “idealized” according to Pelikan. Because it contained among others, the unexpurgated account of David’s adultery with Bathsheba and murder of her husband Uriah.

The Hebrew Tanakh consists of Torah or the Pentateuch which contain divine law and legislation. Followed by Nevi’im or the Prophets which contain historical background and setting of the prophets and formed a commentary on the history of Judah and of Israel. Then come to a section called Kethuvim or the writings which are a collection of sacred writings.

By the third and second centuries BCE, Jews has been dispersed throughout the Greco-Roman world, many younger generations did not speak Hebrew and only understand Greek, which was a fashionable language at that time. One of the cosmopolitan cities with significant Jewish population was Alexandria, Egypt. 72 Jewish scholars from 12 tribes of Israel were dispatched to Alexandria to translate the Tanakh to Greek. The translation was later called Septuagint, the Latin word for seventy.

This translation has a profound effect on the writing of the New Testament. For example, Hebrew Tanakh described the birth of Immanuel by a young woman without specifying any status. The Septuagint uses the word “parthenos” which later quoted in the Gospel as “virgin”.

Commenting on the cultural significance of the Septuagint, Pelikan wrote:

“..the creation of the Septuagint brought it about that the Bible became, willy-nilly, part of world literature. Anyone who could read Odyssey could now read the Book of Exodus, even though some of its Greek might seem rather quaint to a pagan Hellenistic reader (which was, of course, true of the archaic Greek of Homer as well). By contrast, the Qur’an would remain locked in Arabic for many centuries after it had been revealed and committed to writing, and would, therefore, continue to be inaccessible to friendly outside inquirers, not to mention all its enemies.”

Translation means that some meaning might be lost in the process. Pelikan noted that what is said in Hebrew does not have the same force when translated into another language. The Septuagint later acquired a special and inspired status in the Christian church, it became a Christian Bible. ‘The baptism of the Tanakh’ as Pelikan puts it, gave way for Christians to claim a long and distinguished lineage.

Commenting on the New Testament, Pelikan wrote that it was a work of several authors. The Gospels dealt with the life and teaching of Jesus, the Acts tells stories about early Christianity, the Epistles are letters by various leaders and the Revelation is an apocalyptic literature. The Epistle to the Philippians for example, was Paul’s personal letters. The second Thessalonians although said to be written by Paul, the authorship was disputed by biblical scholars. In light of the history of emancipation, in the Epistle to Philemon, Paul plead that a runaway slave, Onesimus, to be treated kindly, but does not demand him to be set free. Pelikan then wrote about how some Epistle such as Jude was appeared in some canon but rejected by others. Pelikan also questions evocative and anatomically explicit love poem in the Song of Songs. He asked, “what is such a book doing in the Bible?”.

At a later stage, having already been translated to Greek and called Septuagint, the Bible was translated to Latin by the work of Jerome (Eusebius Hieronymus), this Latin version was called the Vulgate. In the Reformation age, the call for the return to the primary source in Hebrew resulted in the access of Hebrew text such as the Jewish Kabbalah. The mysterious world of the Kabbalah, the ultimate mystery of Being now can be manipulated to support the doctrine of the Trinity.

Pelikan also mentions Erasmus in the Reformation age, where he omits several dubious lines which has no backing in Greek but creeps into Latin edition. After receiving protest, that this omission might undermine the concept of Trinity, he includes them back on the newer edition. During the Enlightenment critical examination was addressed to all form of authority, from political, intellectual, to religious authority. Commenting on the different level of militarism between old and new testament, Pelikan wrote that this is due to the different political setting. The new testament was written when there is no political power. This is the reason why Christ said, “Pay to Caesar what belongs to Caesar, and to God what belongs to God”. Which beg a question, what kind of things belong to Caesar without belonging to God first? The critical method also probing the question of authorship. Whilst this question is not so important to the faithful. How does one really explain Moses writing his own obituary by describing himself died in the land of Moab? In the concluding chapter, Pelikan noted the ‘contrary lifestyle’ which existed in the Bible. How one square militarism in the Tanakh with the message of peace.

This article is a book review of “Whose Bible Is It?” written by Jaroslav Pelikan. Published by Penguin Books in 2006.