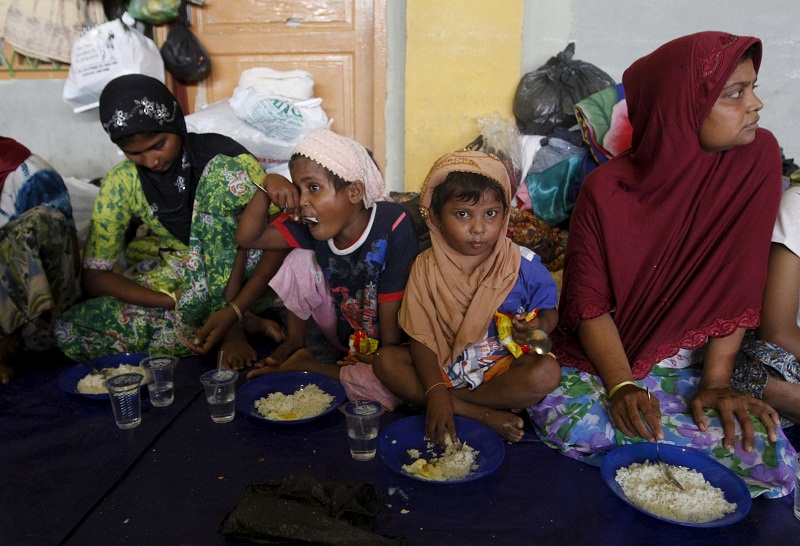 Migrants believed to be Rohingya take their breakfast inside a shelter after being rescued from boats at Lhoksukon, in Indonesia’s Aceh Province May 12, 2015. Thailand and Malaysia may set up camps and detention centers to shelter hundreds of refugees arriving on their shores, officials said on Tuesday, as a leading inter-governmental agency said about 7,000 boatpeople were still adrift in the Bay of Bengal. REUTERS/Roni Bintang

GENEVA, Feb 3 — Myanmar’s military crackdown on Rohingya Muslims has likely killed hundreds of people, with children slaughtered and women raped in a campaign that may amount to ethnic cleansing, the UN said Friday.

A report from the United Nations Human Rights office, based on interviews with 204 Rohingya refugees in Bangladesh, also found it was “very likely” that crimes against humanity had been committed in Myanmar, echoing previous UN accusations.

The so-called “area clearance operations” launched by the military in northwest Rakhine state on October 10 “have likely resulted in several hundred deaths”, the report said.

“An eight-month-old baby was reportedly killed while his mother was gang-raped by five security officers,” the rights office said in a press release, citing witnesses.

Three children aged six or younger were “slaughtered with knives”, according to the report.

“What kind of hatred could make a man stab a baby crying out for his mother’s milk,” UN rights chief Zeid bin Ra’ad Zeid al-Hussein said in the statement.

“What kind of ‘clearance operation’ is this? What national security goals could possibly be served by this?,” he added.

A full 47 per cent of those interviewed by the UN said they had a family member who had been killed in the operation, while 43 per cent reported being raped.

Rights office spokesman Ravina Shamdasani told reporters in Geneva that “the kind of systematic and widespread violations that we have documented could be described as ethnic cleansing”, but noted that was not a legally defined offence provable in court.

The report said the violence was the result of “purposeful policy” designed by one group to remove another group from an area “through violent and terror-inspiring means”.

The Rohingya Muslims are loathed by many among Myanmar’s Buddhist majority.

Myanmar refuses to recognise the Rohingya as one of the country’s ethnic minorities, instead describing them as Bengalis—or illegal immigrants from neighbouring Bangladesh—even though many have lived in Myanmar for generations.

Witnesses told the UN they had been taunted while they were beaten and mocked over the failure of “Allah” to help.

The military crackdown in Rakhine, home to more than one million Rohingya, was triggered by October 9 attacks on border guard posts, which Myanmar and the International Crisis Group say were carried out by foreign-backed militants.

Nearly 70,000 Rohingya have fled the ensuing crisis to Bangladesh.

The Myanmar government’s own probe into the unrest denied that the security forces had carried out a genocidal campaign against the Rohingya.

The government, led by Nobel laureate Aung San Suu Kyi, has said the allegations are invented and has resisted mounting international pressure to protect the minority.

But the UN’s Zeid, who has previously urged Myanmar to act, hit back again on Friday demanding that impunity for such serious crimes had to stop.

“The Government of Myanmar must immediately halt these grave human rights violations against its own people, instead of continuing to deny they have occurred,” he said.

Myanmar government spokesman Zaw Htay had no immediate comment as he had not seen the UN report.

Shamdasani however told reporters that the rights office had shared their findings with the government and was “engaged with them in Geneva as well as in Myanmar.” — AFP