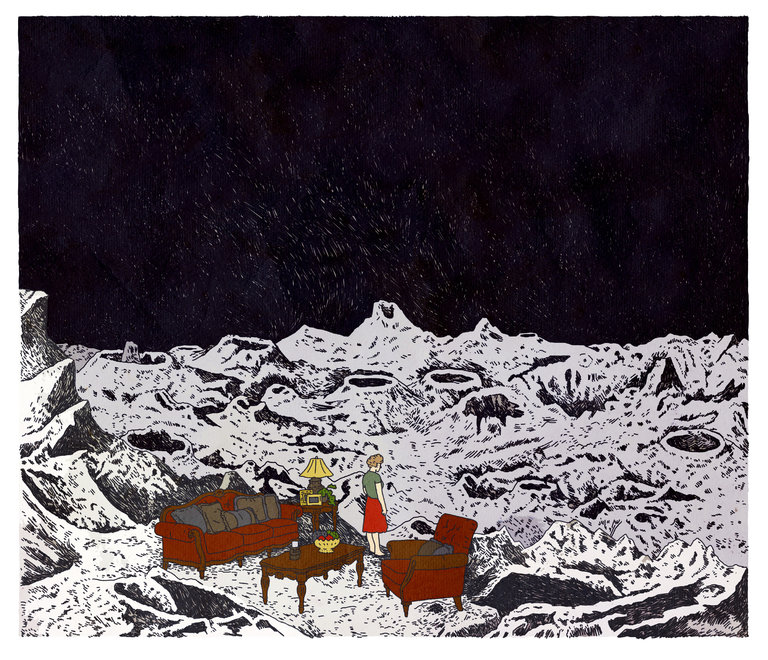 THIS CLOSE TO HAPPY
A Reckoning With Depression
By Daphne Merkin
288 pp. Farrar, Straus & Giroux. $26.

Not so long ago, the mere fact of writing that you had suffered from depression conferred a badge of courage, but such confessions have devolved into a dull mark of solipsistic forthrightness. Famous people use such disclosures to persuade you that they are just like you, perhaps even more vulnerable; it’s a way of compensating for the discomfort attached to their glamour. Indeed, in an increasingly stratified world, people with any modicum of privilege may reveal their depression as an assertion of their common humanity. Clinical misery has taken over from death as the great equalizer. Vanity of vanities, all is depression.

Into this morass daringly comes Daphne Merkin with the long-awaited chronicle of her own consuming despair. Merkin was born into circumstances of plenty, the poor little rich girl; she is not interested in universalizing, though she often does so almost inadvertently. In the earlier part of her memoir, her tight focus on her own story at the expense of anyone else’s can come off as self-indulgent, even self-aggrandizing, but it is part of her considerable art that by the end, it feels like a winning frankness. The reader is saved from diaristic fatigue by the sharpness of her observations. She is not out to demystify life on Park Avenue, nor even to apologize for it, but only to explain her experience, which happens to have unfolded there. She does not try to unpack the function of the amygdala, avoids all the statistics about the rate of the illness and does not apologize for her descents into darkness. Instead, she narrates what happened and how it felt to her. And she does so with insight, grace and excruciating clarity, in exquisite and sometimes darkly humorous prose. The same tinge of self-aware narcissism that makes the book at times so annoying makes it finally triumphant. Merkin is unlikely to cheer you up, but if your misery loves company, you will find no better companion. This is not a how-to-get-better book, but we hardly need another one of those; it is a how-to-be-desolate book, which is an altogether more crucial manual.

Most memoirs aim to seduce; you are supposed to fall in love with the writer, or at the very least to approve of him or her. Merkin’s book makes no such demand; she is perfectly content to ensure that you admire her not at all. She blames herself so readily that you get to blame her, too. She takes a certain masochistic relish in trying to alienate with her singular blend of self-obsession and ostentatious vulnerability, and parts of the book appear to be intended as a punishment of everyone who hasn’t loved or understood her, from her mother on down to the reader. Yet this very “go ahead and hate me” dynamic achieves a real intimacy that more cautious accounts cannot equal; you end up liking her nearly in spite of herself. Mary McCarthy, asked to blurb Merkin’s first book, expressed astonishment at the book’s “lack of shame,” and wrote that “the book fascinates one by its openness.” It’s hard not to have the same take on this mordant volume with its waves of brittle honesty and blunt nakedness.

Merkin is capable of being at once melodramatic and finely nuanced; she has so many good phrases about depression that it’s hard to choose among them. In one episode, she is “shorn of relief,” which condenses the relentless descents into a perfect epigram. Depression is a social condition, and she gives it a social context, writing: “It was as though I fell off the end of the earth the minute I wasn’t in the presence of another person — or perhaps I meant that the other person fell off the end of the earth, or that we both did. However the process works, everyone seemed to dissolve, and I was left to wander around in a moonscape bleached of reliable human connection.” For those of us who have suffered the slings and arrows of this particular demon, there can be no clearer summary.

Merkin’s parents were prosperous Orthodox Jews who, in her telling at least, were cold and unloving, but who seem nonetheless to have provoked in her a passionate and consuming attachment. Her mother fulfills all the clichés about Jewish mothers except the one about unbridled self-sacrifice. She is domineering, intellectually inclined, critical, with a viselike grip, and so woven into the fabric of her children’s lives that they cannot have any experience that is not somehow of her. She appears empathetic enough to grasp what her children are feeling, but not very kind in the application of that knowledge. As a child, Merkin could achieve her mother’s full attention only when she was sick, and she ponders whether her yearning for maternal affection might have been an engine of her later breakdowns. When Merkin gets married, she feels she has betrayed the sacred monster she so loves to hate. “We were tangled up like bedclothes,” she complains, and yet she also writes, “Without my mother, who will cut up the world into bite-size pieces for me?”

You feel Merkin struggling to see her mother even as she professes to escape from her. “The fact is that she is not as unaware of my turmoil as she acts — or as I choose to believe,” she acknowledges. “There is nothing she doesn’t know, nothing that will undo her. Perhaps this resilience is what she offers instead of a more recognizable form of love.” This ruthless intimacy, no matter how poisoned, was inescapable; and when it faded, the shock was palpable. Of her mother’s final illness, Merkin observes, “She was alert enough but seemed far away, as though she had sailed out to sea while the rest of us stayed on dry land.” Those psychoanalytic narratives in which barely suppressed family drama and cruelty are intermingled with attachment and thus produce neurosis are often questioned in our post-Freudian epoch, but they hold true for Daphne Merkin, who has been much analyzed by psychiatrists and friends and family and self to emerge as an epitome of what analysis seeks to locate: a person in whom every emotion is also its opposite.

Her concern that her own depression is a pathetic failure, and perhaps even an imagined hysteria, salts a memoir full of actual hospitalizations and suicidal longings. She describes sitting at a dinner where she feels depression is “a fraudulent bundle of symptoms, an inflated case of malingering that everyone suffers from but that only a select, self-indulgent few choose to make a big deal about.” She is one of those who make a big deal about it, but she can hardly say how or why. In one telling passage, she writes: “Yesterday in therapy I described my life as ‘horrific,’ which I realize is subjective and self-dramatizing. . . . I know there are people hanging on by a thread in Haiti and the Congo and elsewhere across the globe, I know, I know, I know. . . . But I still can’t get out of being me, a desperado from way back.” Elsewhere, she confesses, “First there was the confinement of my childhood, like an incessantly replayed loop of film, and now there is my adulthood, which seems like a prison of a different kind.” Yet she knows how unattractive her condition is; she writes about sweating a lot, and about being boring, even to herself. “The truth is that no one is interested in why you want to kill yourself, no one really believes that you will, until you’ve already done it, and then it becomes morbidly intriguing to try and map it backward.”

Merkin is accustomed to the disengagement that her emotional state provokes; she dares us to disengage like so many others. Of her most recent hospitalization she says, “In my intake interview . . . I alternated between breaking down in tears and repeating that I wanted to go home, like a woeful child left behind at sleep-away camp. The admitting nurse was pleasant enough in a down-to-earth way but was hardly swept away by gusts of empathy for my bereft state.” She describes her envy of the anorexics on the unit, who “were clearly and poignantly victims of a culture that said you were too fat unless you were too thin. . . . No one could blame them for their condition or view it as a moral failure, which was what I suspected even the nurses of doing about us depressed patients. In the eyes of the world, they were suffering from a disease, and we were suffering from being intractably and disconsolately — and some might say self-indulgently — ourselves.” While Merkin nearly boasts of her nose-dives into hell, she also relates how hard she has worked to mask her depression, an enterprise that has made her feel only more alone. “I have hurled all the charm and wits I have at my disposal against my proclivity to depression, such that it would be difficult for even close friends of mine to detect how low I am at any given time.”

The power of such passages in “This Close to Happy” is that she refuses all defenses. She herself is never sure that she isn’t being self-indulgent, and her consternation about that fact invites deep sympathy with her underlying pain. She longs to be a better mother to her daughter, and worries constantly that her lapses into inchoate abnegation might be devastating to her child. She might not be an easy person, but she is determined to be better at affection than her parents were.

It is hard to be depressed, but it is also hard for those who have been depressed to forsake their condition. Merkin writes: “One minute you were in the shuttered-down universe of the verifiably unwell, of people who talked about their precarious inner states as if that were all that mattered, and the next you were admitted back into ordinary life, where people were free to roam as they pleased and seemed filled with a sense of larger purpose. It could cause vertigo if you weren’t careful.” Yet she does emerge, time and again, to feel the relief in being able to “entertain unhappy thoughts without getting stuck in a stranglehold of despair.”

She concludes by sharing that she feels better now, but we already knew that: If she didn’t feel closer to happy, she couldn’t have finished this book. She knows how foolish it is for a depressive to write about being better in a way that sounds permanent; she describes how entering a hospital after writing of depression in the past tense seemed a betrayal of a literary persona on which she had become reliant. She limns the fantasy of the depressed person, always believing against the odds that it is possible to be free of the condition’s endemic weight. “This secret conviction bears some resemblance to religious faith,” she observes, “although it demands nothing and offers nothing back except its own irrationality.” It is standard fare to say that books on depression are brave, but this one actually is. For all its highly personal focus, it is an important addition to the literature of mental illness.