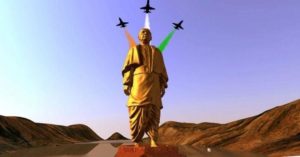 India has unveiled its mega statue of Sardar Patel – The tallest statue in the world as the symbol of its independence movement. The statue located at about 3.5 km downstream the Sardar Sarovar Dam near Rajpipla, 100 km southeast of the city Vadodara. The ceremony held in Wednesday, in conjuction with the 143rd anniversary of Patel’s birth was attended by Indian Prime Minister Narendra Modi, the mastermind behind the creation of the masterpiece.

The construction began on December 19, 2015 and took about 34 months to complete. The project leader, Padma Bhushan Ram V.Suthar is a 93-year-old acclaimed sculptor who graduated from the prestigious J.J School of Art in Bombay. He had been involved in numerous sculpting project such as Mother Chambal at Gandhi Sagar Dam, equestrian statue of Maharaja Ranjit Singh in Amritsar and few statues of Mahatma Gandhi.

The statue is divided into five zones – Up to its shin is the first zone, comprising three levels, including an exhibit floor, mezzanine and roof. This zone will contain a Memorial Garden and a large museum. Zone 2 extends up to the statue’s thighs at 149 meters, while Zone 3 goes up to the viewing gallery at 153 meters. Zone 4 comprises the maintenance area and Zone 5 the head and shoulders.

Prime Minister of India, Narendra Modi stated that the statue will stand high not just in meters and feet, but much more in terms of academic, historical, national and spiritual values

Who is Sardar Vallabhbhai Patel?

Vallabhbhai Patel popularly known as Sardar Patel or “iron man” of India was born on 31 October 1875 in Gujarat, India. He was an Indian barrister and statesman, the founding father of the Republic of India as he united all diverse 562 princely states to build one great Republic of India after its independence in 1947.

He also presented the Directive Principles of State Policy (DPSP) in the constituent assembly. He served as the 1st Commander-in-chief of the Indian Forces, Minister of Home Affairs and as the first Deputy Prime Minister of India.

All you need to know about the statue

According to the official site, this statue will not just be a mute memorial but a fully functional tourism spot. Apart from the mega statue, tourists can visit the Valley of Flower, Museum & Audio Visual Gallery, and the research center. The statue will be expected to attract 10,000 tourists daily.