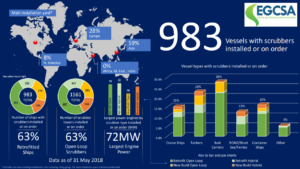 IMO has been working to reduce harmful impacts of shipping on the environment since the 1960s. Annex VI to the International Convention for the Prevention of Pollution from Ships (MARPOL Convention) was adopted in 1997, to address air pollution from shipping.

The main type of “bunker” oil for ships is heavy fuel oil, derived as a residue from crude oil distillation. Crude oil contains sulphur which, following combustion in the engine, ends up in ship emissions. Sulphur oxides (SOx) are known to be harmful to human health, causing respiratory symptoms and lung disease. In the atmosphere, SOx can lead to acid rain, which can harm crops, forests and aquatic species, and contributes to the acidification of the oceans.

Limiting SOx emissions from ships will improve air quality and protects the environment. This is the reason why the International Maritime Organization (IMO) will enforce the emission limit of sulphur to 0.50% m/m (mass to mass) by 1 January 2020. Currently in certain area the emission has stricter limitation at 0.10 % m/m. This is the Emission Controls Area (ECA) zones that includes Baltic Sea area; the North Sea area; the North American area (covering designated coastal areas off the United States and Canada); and the United States Caribbean Sea area (around Puerto Rico and the United States Virgin Islands).

What should the ship owner do?

Most of the merchant vessels in the world are equipped with diesel engines which are running in marine diesel oil (MDO) and heavy fuel oil (HFO). These engines are classified according to the IMO emission standards that commonly referred to as Tier I to Tier III standards. In the presence, IMO Tier I engines are no longer in service due to the regulations. 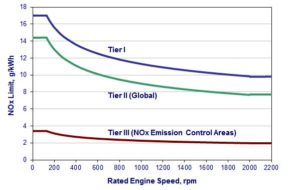 To further comply with the becoming IMO 2020 sulphur, the ship owners may opt to use emission compliant fuels such as LNG. They need to do major overhaul on the main engines; to change to engines that can run on the compliant fuels. This alteration may take some time and costly.

Another option is to install the scrubbers. It is an additional structure that being installed at the funnel area to act as a ‘filter’. The sulphur oxides from the exhaust are passed through a water stream system (gas treatment unit) to become sulphuric acid. This highly corrosive acid will be neutralised with sufficient alkaline seawater before being discharged to open seas.

Since the beginning of 2018, the scrubbers retrofit work had gradually increased. A survey of EGCSA members and recent reports have revealed that major ship operators such as Spliethoff, Frontline, DHT and Star Bulk have opted for scrubbers. The survey showed that 63 per cent of all ships have been or will be retrofitted with scrubbers, with 37 per cent are new building installations. 988 of 1,561 individual scrubber towers installed or on order are for open loop scrubbing. Bulk carriers are reportedly the top ship type adopting scrubber technology, with containerships and tankers following. In each of these sectors, open-loop installations predominate.

What happen to vessels not comply with the new regulation?

The vessels might be sanctioned and fined by individual Parties to MARPOL such as flag authorities and port States. IMO does not set fines of sanctions.