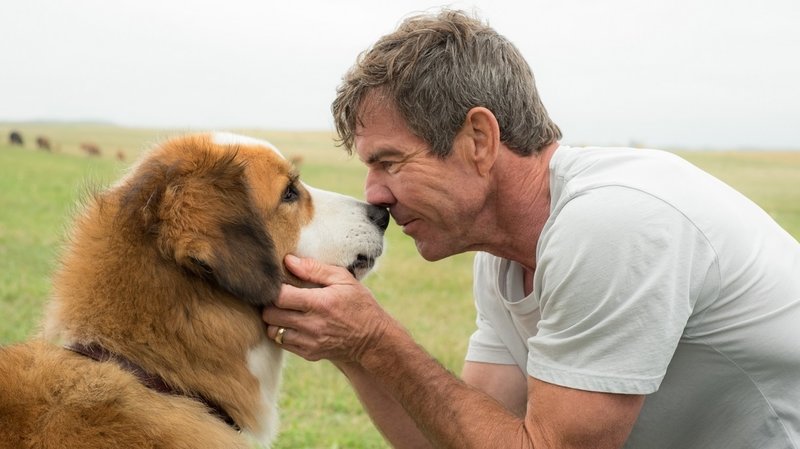 What is a dog’s purpose?

This existential question haunts a canine as the pup takes several different forms in A Dog’s Purpose, from Golden Retriever to German Shepherd to Corgi and other breeds throughout the years, starting in the 1960s and continuing to the present day. It arrives at an answer eventually, something in line with the sentimental bromides expressed throughout the movie, which showcases its playfulness, courage, and companionship astride many owners.

What it doesn’t answer is how reincarnation figures into it: This same incredible dog not only keeps coming back from the dead, but doesn’t forget its previous incarnations. That means it’s accumulating knowledge and experience from past lives, which would have to make its purpose far greater than merely being a very, very good dog. The implications of decades — centuries, millennia — of a dog continuing to learn, independent of its corporeal shell, is… well, it’s frankly chilling. Or, at a minimum, a premise more suggestive of Cloud Atlas than Lassie.

But these are questions one can only idly consider while A Dog’s Purpose goes through its paces, perhaps alongside questions about the morality of paying money to see a movie trailed by allegations of animal abuse. Nothing in the movie itself is that compelling, since the individual stories mostly don’t have the space to develop beyond clichés about lonely people needing a loyal friend or situations that call for canine derring-do. The one distinguishing feature, baked into the film’s conceit, is that we get to anticipate the dog dying at the end of every segment, and endure the repeated heartbreak of owners who cannot know its spirit is infinite.

In other words, a great time at the movies!

In narrative terms, the dog’s purpose here is to serve as a deus ex machina that links multiple stories together and contrives an improbable arc between the first one and the last. To that end, the largest chunk of the film is given over to his time as a Golden Retriever in an idealized Midwestern town, where he’s adopted by a boy named Ethan (Bryce Gheisar). The dog watches Ethan grow up into a teenager (K.J. Apa), fall in and out of love, witness his parents separate over his father’s alcoholism, and head off to agricultural college, which is around the time the animal starts to slow down a little.

From there, the dog enjoys stints as a German Shepherd for a Chicago K-9 unit, which brings out its heroic side, and as a snuggly Corgi companion for a college student, who indulges its appetite for potato chips and pizza. And the one recognizable star of the film, Dennis Quaid, adopts the dog in the last segment, after it escapes an abusive situation and finds him alone on the family farm, eager for a little company. There’s a heartwarming twist you can see coming from lifetimes away.

Director Lasse Hallström, a Swede with a résumé that includes My Life As a Dog, What’s Eating Gilbert Grape, The Cider House Rules, and Chocolat — to say nothing of a treasure trove of ABBA videos — worked with canines before on Hachi: A Dog’s Tale, an English-language adaptation of a Japanese hit about the relationship between man and dog. The best he can do with A Dog’s Purpose (based on a novel by W. Bruce Cameron) is give the film the lacquered sheen of a well-groomed purebred and follow through dutifully on all the expected comic and sentimental beats. There are shenanigans. There are rescues. There are tears.

As the voice of the dog, Josh Gad reproduces the eagerness and fun he brought to the snowman Olaf in Frozen, and his optimism keeps the tone as light as possible and lends the film a sense of continuity. He also sells, as best he can, the idea that even a reincarnated dog lives in the moment, rather than dwelling on the memories (and smells) of the past or the inevitability of passing on to another life. There’s an intended lesson for humans in that thought, but humans and dogs are not the same species: The effect of losing the dog over and over again in A Dog’s Purpose is cumulatively wearying, and we may find ourselves drawing on memories of dog movies that made us laugh more or affected us more deeply. More often than not, we may find ourselves wanting to live in a different moment altogether.